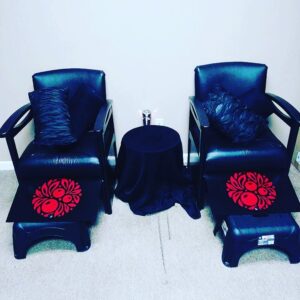 The Yoni (Vaginal) Steam dates back thousands of years and is seen in almost every indigenous culture. from Africa, Asia, India, the Mayan, Greece, Palau, and Native American cultures. Known as Yoni Steam, V-Steams, Vaginal Steaming, Chai-yok, or Bajos, Yoni Steaming has been used as a common ritual to honor and connect with feminine energy. Yoni Steams can be utilized to restore balance and clear away stagnation and many other issues. Its popularity has been steadily growing in the West and for good reason.

The Yoni Steam is a natural and gentle holistic approach to vaginal steaming.  This form of hydrotherapy utilizes herbal infusions from mother earth into a warm relaxing bath that you sit over and allow to cleanse and detox your vagina, cervix, uterus and entire reproductive system via the steam vapors. Vaginal Steaming has been historically used to cleanse the uterus, release toxins, for fertility conditions, cleansing after the menstrual cycle each month, after childbirth support to re-strengthen and tone the reproductive organs, symptoms of PMS, blood clotting during the menstrual cycle, to regulate the menstrual cycle and also for preventative care.

Mugworth – Fights infection through its antimicrobial and antifungal properties, balances female hormones and stimulates the production of hormones that help to maintain uterine health.

Calendula – Soothes and aids in healing of scar tissue, vaginal tears, or hemorrhoids

Rosebud – A relaxing, uplifting and astringent herb that smells delightful, and softens the skin.

Lavender – One of the most relaxing herbs we have, lavender is antimicrobial, supports healing, and also promotes menstrual flow

Sage – Especially good for depression, loss of memory, and energy cleansing. Sage is great in aiding cramps. It’s is antispasmodic, antibacterial, and antimicrobial. Sage is very relaxing and is also the best to release unwanted energy in the womb.

Chamomile – An anti inflammatory and anti-spasmodic. Helps to ease people with anxiety, insomnia, and depression. Can help aid in reduction of menstrual cramps

How is the steam done?

Clients sit comfortably on a stool inspired style chair allowing the steam from the custom herbal blend to permeate the outside of the vagina. Clients are draped in a covering blocking the steam from escaping. This ensures the client is getting the maximum benefit of the steam.

How long does the steam last?  Appointment is 1hr with a typical steam of 30-45 minutes.

This service is noninvasive

All herbal blends are custom blended during consultation.

May experience one or more of the following:

May counteract with certain medication

Service not rendered on the following:

If you have a IUD

If you have open sores

Further details will be discussed with client after appointment is booked.

*All clients will fill out an intake form, privacy form and liability waiver prior to service.

We reserve the right to refuse treatment.

I am not a medical professional and do not claim that this treatment is a cure for any disease or condition. The information provided is for educational purposes only, and is not a claim to diagnose, treat or cure any illness or injury. Nor is it a substitute for the advice of a qualified healthcare professional.